At first, beachgoer Dave Cannon didn’t know what to make of the bizarre creature he found washed up on Black’s Beach, San Diego’s infamous nude beach.

“You know, I go to this beach fairly often, so I’m familiar with seeing a lot of organs, but I’ve never seen an organism quite this huge and fearsome,” he told YEW about his discovery on Saturday, Nov. 13. “The giant sack hanging from its forehead is the stuff of nightmares.”

Cannon said he initially thought it was a naked sunbather with an odd frame, but after closer inspection he realized it nothing of the sort. “I’ve come across some gnarly mouths in my day, but I can’t imagine getting an appendage stuck in that thing” he said. “Ouch!”

Cannon snapped photos of the 12 inch-long fish, which experts have identified as a Pacific footballfish, a type of deep-sea anglerfish rarely seen outside the ocean.

The girthy fish can live at depths of up to 3,000 feet, officials said. 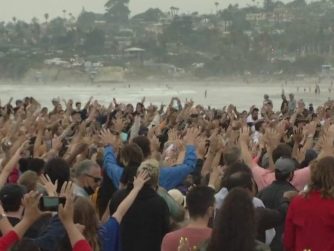 Plagued with small surf for the last couple of weeks, thousands gathered at Cardiff State Beach Sunday evening to pray for waves while...