Athletic Brewing is proud to announce its collaboration with Brave Noise to brew the first-ever non alcoholic release of its pale ale recipe. Athletic joins over 90 other breweries that have released Brave Noise to rally behind the organization’s powerful message. The release will be celebrated with a Brave Noise Release Party at Athletic Brewing’s San Diego brewery on October 24th.

Brave Noise is a global collaboration sparked by Brienne Allan, a brewer working at Notch Brewing in Salem, Massachusetts, when she posed the question “Have you ever experienced sexism in the beer industry?” Brienne’s question prompted stories of sexism, harassment, and assault experienced by countless women and went viral. The outpouring of stories shared on social media morphed into an industry movement and catalyst for industry change that led Brienne to develop the recipe for Brave Noise.

The collaborative effort between breweries, microbreweries, and beer lovers seeks to make a long-term commitment to change and to provide safe and inclusive environments. Athletic Brewing will create the industry’s first non alcoholic release of Brave Noise.

Cara Wilson, one of Athletic’s San Diego-based brewers, is spearheading the collaboration. “I feel very honored to brew Brave Noise for Athletic Brewing,” said Cara. “I’m proud of Athletic not only for this effort but proud to be part of an organization that is committed to creating an inclusive environment internally and who is committed to speaking out and advocating for others.”

All proceeds from this limited release will benefit Hollaback!, a non-profit organization that is an official Brave Noise partner. Hollaback!’s mission is to create safe spaces for underserved communities and end toxic culture by educating and empowering bystanders and victims of harassment.

Brave Noise is a dry hopped pale ale with a peachy nose, creamy mouthfeel, fruity notes of tangerine, mango, and stone fruit, and a balanced bitterness. This delicious and refreshingly fruity brew will be available from Athletic Brewing exclusively at their event in October. Single cans will be handed out and 6-packs will be available for purchase.

The free event, the first at Athletic’s San Diego brewery, will feature Brave Noise, live music, and vendors led by women, BIPOC, and/or members of the LGBTQ+ community. 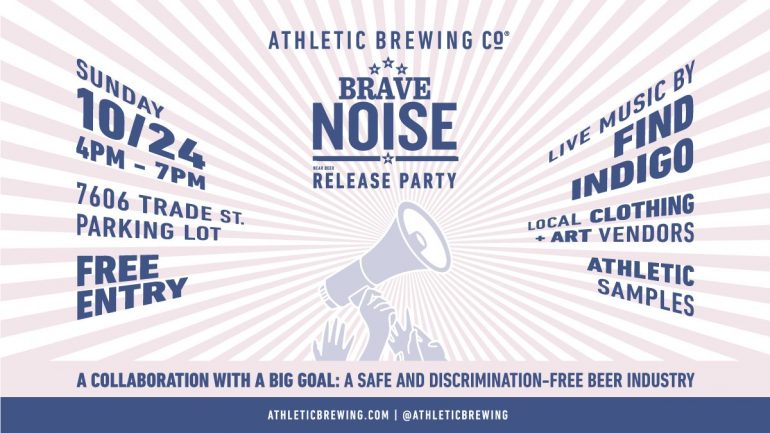