Born Greg Lawhead in San Diego on Feb. 11, 1937, later taking the last name of his stepfather, Ash Noll, his family made the following announcement:

It is with a heavy heart the Noll family announces the death of our patriarch, Greg Noll. Greg died of natural causes on Monday June 28th, at the age of 84. We invite all of our friends and family to celebrate his life by sharing this post and your stories, pictures and experiences through your preferred platform. 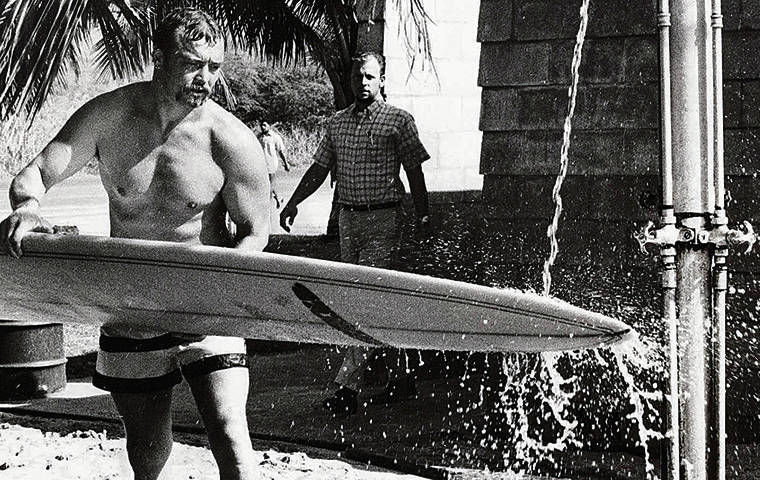 Noll first gained attention in the 1950s when he bailed California to Mexico, Australia and Hawaii in search of the world’s biggest waves. In 1964, he was credited with being the first person to ride a wave at Pipeline.

“The wave I caught at Outside Pipeline that day walled up twenty-five-feet high about half a mile in front of me. It broke to the left, so I was riding with my back to the wave, goofyfoot, and it was a god-awful uneasy feeling. Instead of getting smaller as I rode it, the sonofabitch grew on me,” Noll said. “It got bigger and bigger, and I started going faster and faster, until I was absolutely locked into it. I felt like I was on a spaceship racing into a void. At first, I could hear my board chattering across the face of the wave in a constant rhythm. As my speed increased, the chattering noise became less frequent. Suddenly there was no noise. For about fifteen or twenty feet, I was airborne. Then I literally was blown off my board.”

In 1969, at Hawaii’s Makaha Beach, Noll rode the biggest wave — THIRTY-FIVE feet — anybody had ridden at the time. After the monumental accomplishment, he retired from big wave surfing.

More than an influential and iconic surfer, Noll was also an entrepreneur who helped transform the sport with his Greg Noll surfboards — the first boards to be made of balsa wood, making them lighter and more maneuverable.