A HERO of a husband saved his wife from a great white shark by punching the deadly predator in the head.

At the same time, her husband, Mark Rapley, jumped from his surfboard and punched the shark until it let go of his lady, Australian media reports. 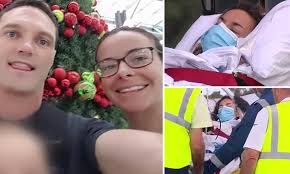 “This fella paddled over and jumped off his board on to the shark and hit it to get it to release her and then assisted her back into the beach,” Surf Life Saving NSW chief executive Steven Pearce told the Sydney Morning Herald. “Pretty full on, really heroic.”

Experts believe Doyle was being attacked by a 10 foot  juvenile great white shark.

After receiving medical attention on the beach, she was airlifted to Newcastle Hospital for surgery to her right leg and remains in stable condition.