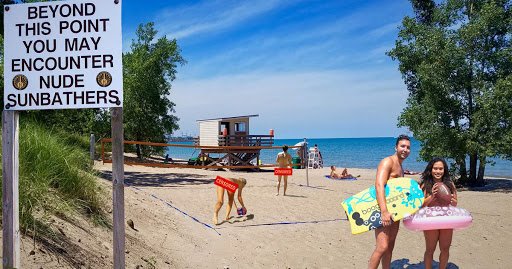 Minneapolis police creepily used drones to bust nudies at an unofficial nude beach, according to a report from local WCCO.

Although Twin Lake beach has a long history of nudity, anyone dropping dong is violating the law. No different than Black’s Beach in La Jolla, CA.

After receiving “a dozen complaints this spring and summer regarding people being nude, drinking alcohol or doing drugs at the beach,” according to WCCO,  officers from the Golden Valley Police Department deployed the drones.

As the drones caught video of people frolicking in the buff, officers swooped in and wrote tickets.

Understandably, this method of law enforcement didn’t sit well with the public.  In addition to invasion of privacy issues, people find the current law discriminatory — specifically, allowing men to be topless but not women.

“If they are gonna cite anyone for toplessness I’m glad it’s me because I have energy to fight this,” Chesley told the local CBS affiliate. “I think it’s really silly that people of all genders with all sorts of breasts can’t show them.”