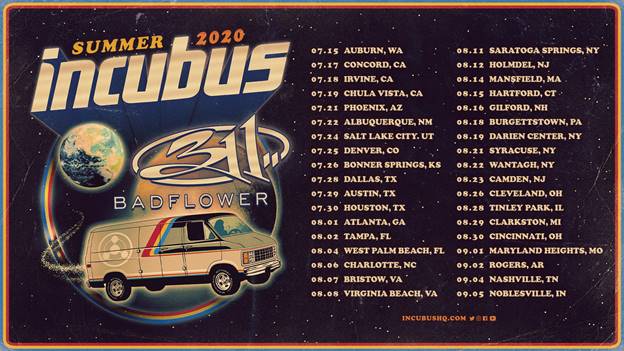 Today, multi-platinum selling band INCUBUS announced they will be hitting the road with 311 on their upcoming North American amphitheater tour. This summer marks the first time in 20 years that Incubus and 311 have toured together.  Kicking off July 15 in Auburn, WA, the Summer 2020 jaunt will stop in Chula Vista at North Island Credit Union Amphitheatre on Sunday, July 19, 2020.

In conjunction with the announcement, Incubus also announced the release of their highly anticipated new EP, Trust Fall (Side B), due April 2020.

On the So Cal band’s recently released single “Our Love”, the band lock into an irresistible intergalactic groove, orbiting a funky bass line and percussive bounce.  Meanwhile, the video (above) transports the band to a new galaxy. After crash landing on a remote planet, Brandon Boyd connects with his bandmates. They jam in a psychedelic desert underneath a bright sun before slipping into a wonderland populated by mushrooms with a Fungus Amongus flare.

Tickets for the tour will go on sale to the general public starting Friday, February 7 at 10am local time at LiveNation.com. Meanwhile, try to WIN a pair below.