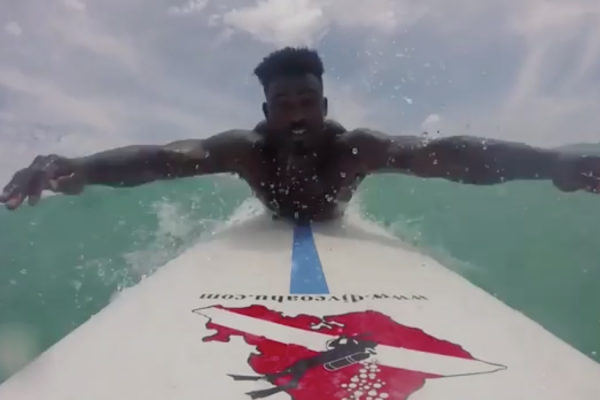 Yup, having grown up in the surf town of New Smyrna Beach, Florida, he told The Athletic’s Matt Barrows that Billabong even once offered him a sponsorship opportunity.

“I’d be out there surfing or skateboarding on my own, not really trying to make a scene or anything,” Mostert said. “And this guy came up to me and wanted to offer me a contract. He was intrigued, basically.”

Needless to say, the star running back stuck with football.  Graduating from Purdue University before entering the NFL, Mostert doesn’t get out as much as he used to, but he does find similarities between both sports.

“You’re in a wave and at that moment you want to make a decision whether you want to do a trick — flare-up, do a nice trick and land — or just ride the wave out,” he told Barrows. “That’s the same thing with football: there are a lot of different angles. Sometimes, you have to split two defenders. Sometimes, you don’t want to go out of bounds because you can get an extra three or four yards. So you plant a foot and head upfield.”