Other “only at BeachLife” experiences  include the weekend’s Yacht Rock Brunch starring Ambrosia and Friends.  Sugar Ray will also host a weekend brunch set against a backdrop of raised mimosas and palm trees. 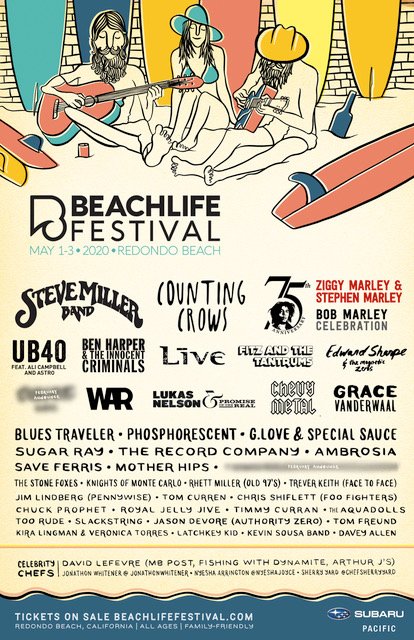 At BeachLife, music sets the mood, but the fest will also feature a wine village, a craft beer bar, a Moet Bubbles bar, Tito’s Backyard BBQ experience, and a wide selection of curated food vendors and trucks across the venue. Additionally, new at BeachLife this year will be a Speakeasy stage which will feature stripped-down acoustic sets from surprise guests. A lineup of artists performing on the Speakeasy stage will be announced soon.

Three-day passes are on sale now on the BeachLife website. General admission passes are currently $299 and VIP passes are $749. The Captain’s Pass, which includes additional perks like backstage access, complimentary alcoholic beverages, and valet parking is $1,895. A percentage of ticket sales will be donated to several charities including Surfrider Foundation, Heal the Bay, Life Rolls On, Redondo Beach Police Foundation, Redondo Beach Education Foundation, and Walk With Sally.