Seattle Grunge pioneers Alice In Chains announced the release of All Secrets Known, a new, limited-release bourbon distilled by FEW Spirits.  A nod to the name of the opening track of the band’s 2009 certified Gold release Black Gives Way To Blue, the bourbon is finished for six months in tequila barrels and bottled at the most rock and roll of proofs, 101 (50.5% ABV).
Said Master Distiller Paul Hletko, “There are no two spirits that have a closer association with rock and roll than whiskey and tequila. Bringing together elements of both, but in an unconventional, innovative way, is an illustration of what we try to do every time we distill a new product.” 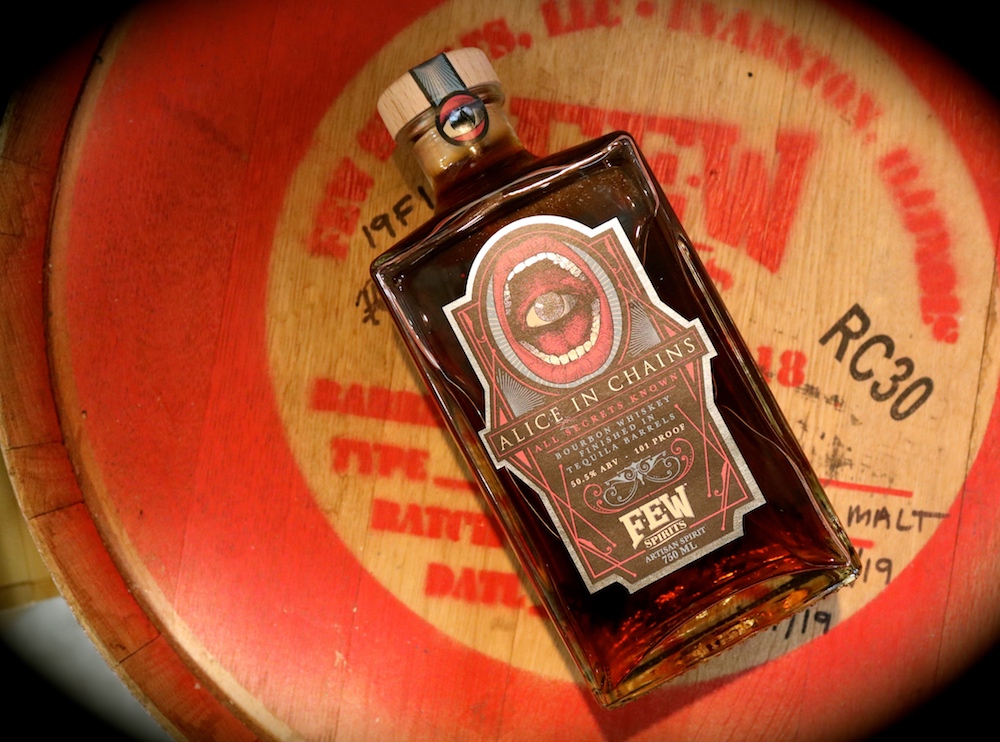 When it comes to the custom label, artist Justin Helton, of Status Serigraph, is no stranger to working with musical giants like Phish, The Avett Brothers, My Morning Jacket, Ween, and The Black Keys.

“I’ve been a fan of Alice In Chains forever with Jar of Flies being one of the first CD’s I ever owned,” says Helton. “‘I Stay Away’ and ‘No Excuses’ were on repeat in my room. For this design I found inspiration in the name All Secrets Known. The eye in the mouth is a play on seeing all that’s been spoken. The color scheme is a nod to Black Gives Way to Blue, the album on which the song ‘All Secret Known’ appears.”

All Secrets Known is yet another foray for FEW Spirits into partnerships with internationally-renowned music acts. In 2006, Hletko partnered with The Flaming Lips to create Brainville Rye Whiskey.
Limited-releases will be available in CA, CO, IL, NY, and WA and for purchase online through ReserveBar.com.