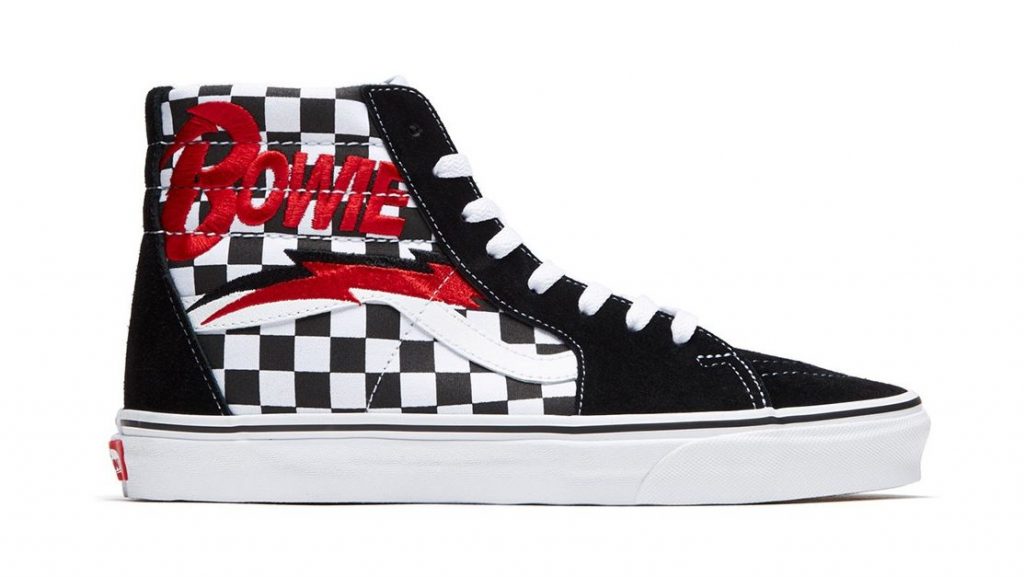 Hell yes, Vans is gearing up to launch a brand-new sneaker collection in honor of the late David Bowie. Drawing design inspiration from Bowie’s discography, the limited edition collection will feature four new pairs of sneakers commemorating the artist. The line will take on the following styles: Slip-On 47 V DXS, Old Skool, Sk8-Hi and Era.

The Sk8-Hi and Old Skool kicks pays homage to Bowie’s alter ego Ziggy Stardust and the album Aladdin Sane.  For the Sk8-Hi (pictured above,) while the lightning bolt on the side panel is Ziggy Stardust era, the textured black & white pattern leans towards 1976’s Station to Station LP.  On the flipside, the Old Skool (below) is 100% Stardust, especially with the 1973 Aladdin Sane album’s classic red & blue thunder bolt decal prominently featured. The polka dot version of the Era (below) takes us back to Bowie’s 1969 self-titled sophomore album. Often referred to by its 1972 reissued titled Space Oddity, the shoe borrows the OG cover’s blue & green polka dot design.  Too awesome. The Slip-On 47 (below) pays tribute to the 1971 album cover Hunky Dory, recreating Bowie’s checkered shirt via a furry toe box and heel counter, in addition to his golden locks on the quarter side panel.

The Vans x David Bowie Tribute Collection is expected to arrive beginning April 5 through select Vans retailers and online, where you can now sign up for official updates. Retail pricing for the kicks will range from $65 to $80.

We’ll take one of each, please.