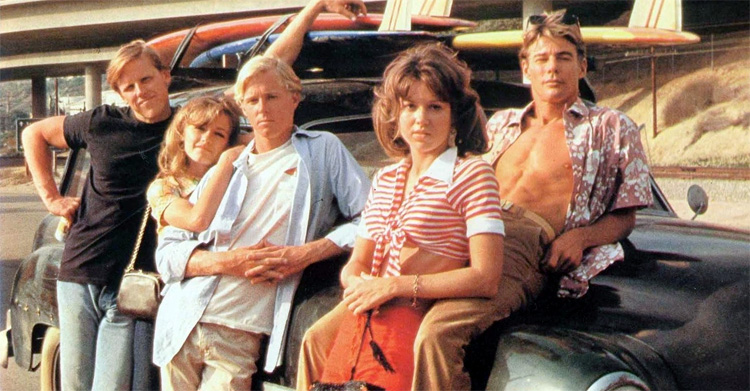 Actor Jan-Michael Vincent has died at the age of 73.  According to reports, the actor died as the result of cardiac arrest in Asheville, N.C., on February 10, 2019.  Perhaps best known for portraying helicopter pilot Stringfellow Hawke in the CBS action series Airwolf from 1984 until 1987, in our YEWniverse, Vincent IS Matt Johnson in Big Wednesday.

The greatest surf movie of all time (sorry, North Shore), Big Wednesday follows three California surfers – Matt Johnson (Jan-Michael Vincent), Jack Barlowe (William Katt AKA “The Greatest American Hero”), and Leroy “The Masochist” Smith (Gary Busey) – coming of age during the Vietnam War years.  Despite their varying personalities, they all share one thing in common, an unequivocal passion for surfing.

Vincent’s character, Johnson, is based on real-life surfer Lance Carson, who struggled with alcoholism throughout the 1960s and 1970s.  Much like Carson, Jan-Michael struggled with his own self-destructive behavior, contributing to a career downfall after Airwolf in the 80’s.

At first, the characters in Big Wednesday revel in the carefree life of beaches, girls, and waves, but, they eventually must face the fact that the outside world is changing, becoming more challenging, and real life is quickly approaching.  Ultimately, the Vietnam war interrupts their idyllic surfer lives, leaving the guys unsure if they’ll even survive until “Big Wednesday,” the mythical day when the greatest, cleanest, most epic waves will pound the coast.

In the movie’s big wave scenes, Bill Hamilton, father of surfer Laird Hamilton, doubled for Jan-Michael Vincent, but Vincent was no stranger to surfing himself. In a 1984 AP interview, Vincent described his passion for surfing, saying “I was a traveling surfer for years. … I’ve been all over the world surfing.”

Sadly, unlike Big Wednesday’s Matt Johnson, who charged that one last epic south-swell, JMV got pounded by life, succumbing to a long history of addiction, illnesses, and injuries.