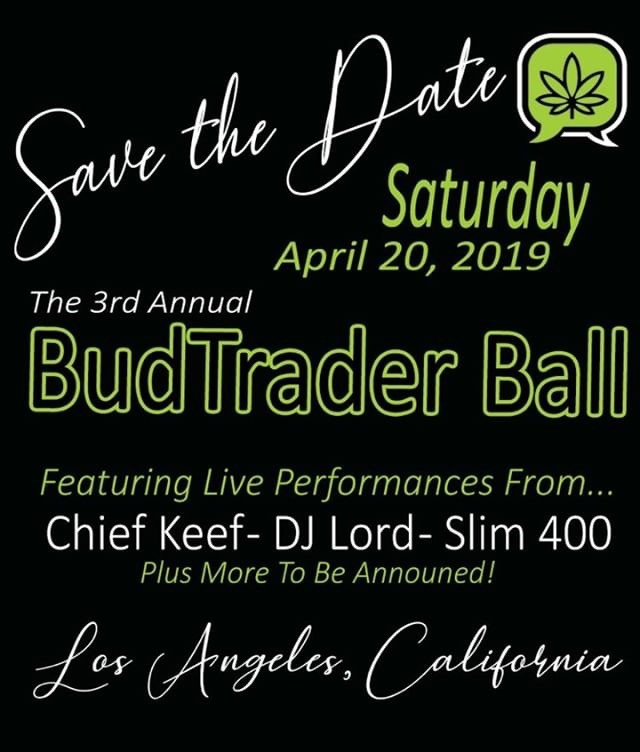 Save the date. On Saturday, April 20, 2019, BudTrader.com is giving us the 4/20 we’ve been asking for with the Third Annual BudTrader Ball.

With 10 “major music groups/artists” and “major A-list, Academy Award-winning movie stars” confirmed to appear/perform, the BudTrader Ball promises a lineup that “beats Coachella and the Super Bowl 100%” according to BudTrader’s owner/CEO Brad McLaughlin.

The ball takes place in Los Angeles, CA, but if you can’t make it, don’t sweat it. BudTrader will live-stream the event, including performances from Chief Keef, DJ Lord, Slim 400, and more, on their website, BudTrader.com.

BudTrader is throwing a party with a purpose. The majority of the profits received from their event will go toward their “Save the Weed, Save the World” campaign.

How did McLaughlin and BudTrader land all this epic talent? According to McLaughlin, “All the talent is performing at a significantly reduced fee or no fee. It’s the cannabis community coming together to save the world through music, cannabis, and positive energy.

“YouTube, Facebook, Google, no one’s ever done this. It’s going to disrupt music, tech, and live events. The artists all signed on because they’re going to have an audience of two million people watching the stream.”

BudTrader has been working to put on high-caliber events for several years. In 2017, they brought the BudTrader Yacht to San Diego Comic-Con.

Ironically, the yacht mysteriously vanished during the night, leaving staff and party-goers confused. Undaunted, they returned to Comic-Con in 2018 with the BudTrader Nerd Headquarters. While not as fancy as a yacht, their offsite was a much bigger success (and more importantly didn’t vanish).

Tickets and exact location details will be announced later this week. Keep an eye on BudTrader’s Instagram feed for more info.

With cannabis creeping more and more into the mainstream, successful events like the BudTrader Ball lend a further sense of legitimacy to the cannabis industry as a whole.