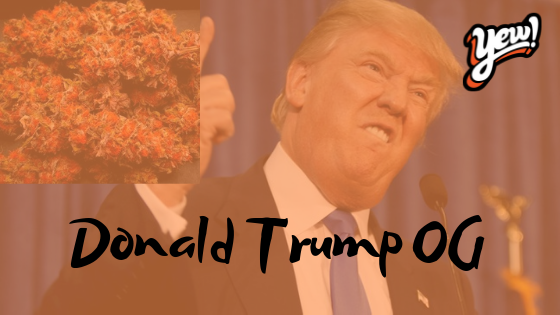 Full disclosure: I haven’t personally tried this one yet; however, its name and description warrant serious consideration.

When searching cannabis classifieds on BudTrader.com, it’s easy to come across some creative ads, to say the least. One in particular caught my eye; first by its name, then by its appearance. Donald Trump OG is so named due to its massively orange hue.

From the BudTrader ad, Donald Trump OG is described as:

a BIG, LOUD, ORANGE FREIGHT TRAIN! Guaranteed to make any boring weekend great again. Have the loudest shit at the next house party with the Donald Trump OG.

Since we’re not likely to find “Donald Trump OG” in any search (I tried), let’s look at its parent strains, Orange Skunk and Orange Creamsicle.

If you check out Leafly, Orange Skunk is a hybrid known for its cerebral high. It’s a recommended strain for treating anxiety, stress, inflammation, and headaches. Expect some giggles with this strain, but keep some eye drops and water handy.

Leafly describes Orange Creamsicle as a hybrid as well with a citrus flavor (of course). Used to treat nausea as well as anxiety, this is another strain that will leave you with some serious dry eye and cotton mouth.

If Donald Trump OG lives up to its parent strains, it’s certain to live up to its description. Will it make cannabis great again? Greater? I don’t know, but I’m highly tempted to take a road trip to LA to find out.