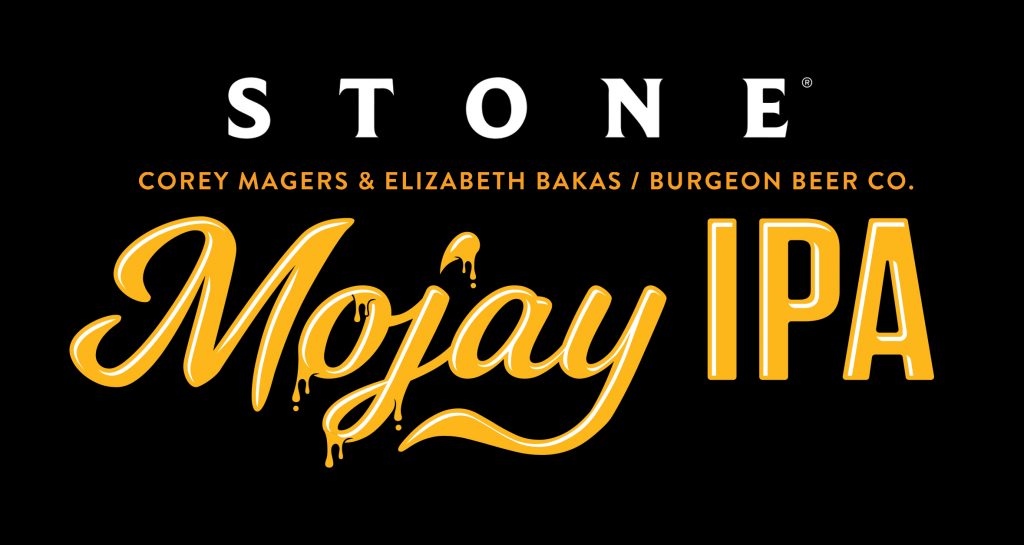 “New England-style” unfiltered IPAs and pale ales are prized for their intensely juicy hop flavor and aroma coupled with a low bitterness and smooth mouthfeel, but Stone does things bigger and bitter-er. This recipe’s respectable bitterness level of 70 IBUs made it a perfect fit for the Stone treatment. However, Stone isn’t the only professional brewer involved in helping take these home-made recipes to the next level. Another aspect of this Stone and AHA tradition is the winner’s selection of an additional Collaborator – an opportunity to lift up smaller craft brewers with exposure via Stone’s widespread distribution network. This year, the homebrewing couple-turned-fiancees tapped Burgeon Beer Company of Carlsbad, known for their prolific offering of hazy hop bombs.

Corey Magers & Elizabeth Bakas / Burgeon Beer Company / Stone Mojay IPA combines the bitterness level and crisp finish of a West Coast IPA with the semi-opaque appearance and intense fruity hop flavor of a New England IPA. It pours a slightly hazy golden hue, offering aromas of orange marmalade and peach. The mouthfeel is full and smooth with a balanced sweetness.

Ten years of this event has brought about some truly incredible beers, thanks to the talent and ingenuity of our local homebrewing community

“Ten years of this event has brought about some truly incredible beers, thanks to the talent and ingenuity of our local homebrewing community,” said Jeremy Moynier, senior manager of brewing & innovation. “We didn’t let trends cloud our judgement on this one. We chose this beer because it was juicy and refreshing while still pleasantly bitter and well-balanced with very clean hop flavors, something that can be a challenge for hazy IPAs. This recipe utilizes flaked wheat for appearance and mouthfeel, as well as a heavy dose of Amarillo, Citra and Mosaic hops for a huge citrus character that has a very fresh-squeezed OJ quality to it, hence the name. Mosaic + OJ = Mojay.”

“We were ecstatic when we won, because it was a chance for our friends and family from all over the country to try our beer,” shared Corey Magers. “It’s not easy scaling up a homebrew recipe but Stone nailed it. The people we worked with at Stone made it an unforgettable experience and we’re proud to see our names up next to Stone Brewing and Burgeon Beer Company. We hope everyone enjoys this beer, which we designed to be the ultimate drinkable IPA.”

Since 2008, the Stone Homebrew Competition & AHA Rally has been held in San Diego County. The competition allows association members to vote on their peers’ beers and places the most highly ranked beers in front of Stone’s co-founders and brewers to select the best of the bunch. After rounding off a decade of this tradition, Stone takes this event east, holding the Rally at Stone Brewing – Richmond for the first time ever on November 17. This year, the 20 entrants and additional guest brewer will be local to Virginia. The event will alternate coasts each year from now on, ushering in a new era of celebrating the noble pursuit of homebrewing.