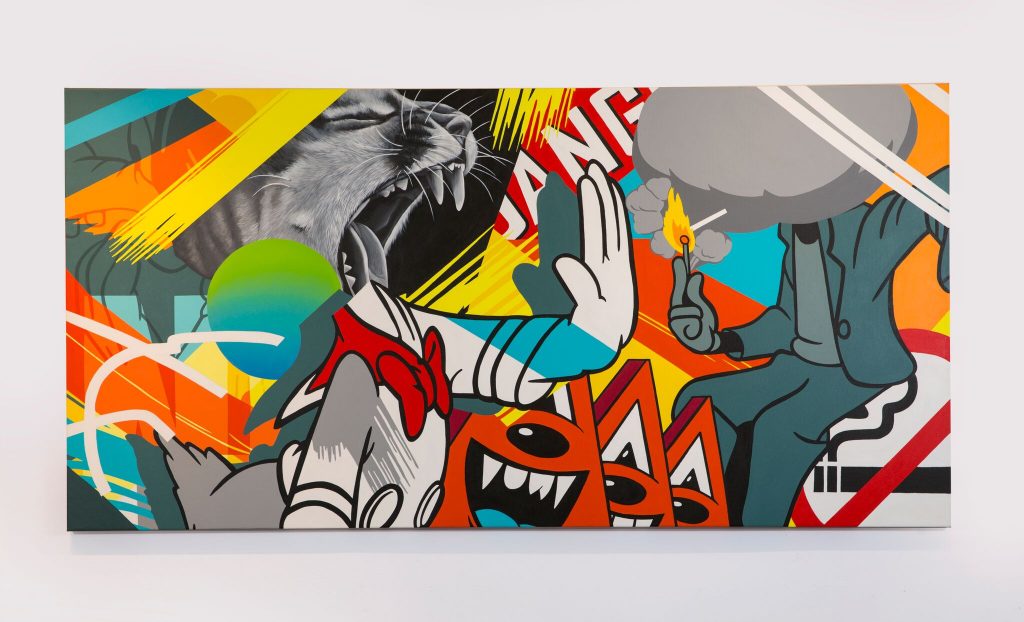 Internationally renowned urban contemporary artist GREG MIKE makes his Los Angeles solo exhibition debut with Inside Voices on Friday October 19, 2018, for a weekend-long showcase on view until October 22. Featuring 25 large works on canvas and a few surprises, Inside Voices is not only the artist’s breakout solo show in Los Angeles, but his first major exhibit since 2014.

GM has spent the last four years traveling the world to paint murals (including the now-iconic “Bear Witness” on Abbot Kinney Blvd in Venice), with his bright, bombastic but polished style evolving to incorporate photorealistic animals. After defining himself throughout his career by his bold work, GREG MIKE declares Inside Voices to be his loudest and largest show to date, coming after a period of immense creative growth, becoming a father, and a snowboarding accident that might have prevented him from ever painting again. “As a kid, adults always tell you to use your ‘inside voice,’ Be quiet. Behave like an adult,” explains GM. “There’s this belief our society keeps pushing that in order to grow up you have to give up your voice and stop expressing yourself. Inside Voices is a complete rejection of that. These new works leverage the style of my outdoor murals, but move inside of the gallery space — and inside of collectors homes — to explore visual representations of internal dialogues.”

With artwork showcased all over the world, in institutions like the High Museum of Art and the Honolulu Museum of Art, Inside Voices breaks boundaries as a fusion of his old and new styles, and on the largest canvases he’s ever used. A true mash-up of styles and mediums, the work nods at GM’s love for classic cartoons, colors, and ferocious animals while exploring internal battles, motives and personal triumphs—and leading the way is his now iconic character Larry Loudmouf.

The work will be exhibited at a pop-up gallery space located at 631 N. Robertson Blvd, West Hollywood, CA 90069.