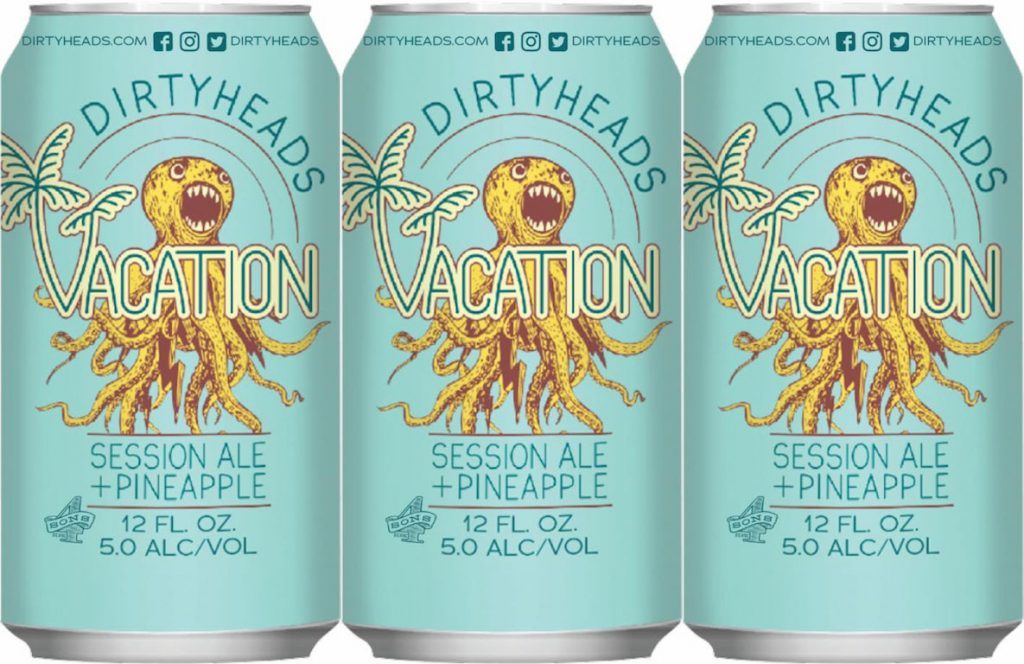 Dirty Heads members Matt Ochoa [drums] and Jon Olazabal [percussion] discovered Four Sons in their backyard and grew to love their beer years ago.  As the two became regulars, they got to know the staff and discovered that the founders of Four Sons were fans of the band. The relationship grew and the idea to create a Dirty Heads beer was born. During the initial conversations they had a lot of ideas about what style of beer to do. Four Sons pulled some samples of one of their lighter beers (an American Lager), and infused it with 4 different fruits (passion fruit, mango, watermelon, and pineapple). Matt and Jon came down to the brewery and did a taste test to see which fruit they liked best in the beer. While some of the others were good, pineapple was hands down the winner. Dirty Heads were fully involved in each aspect of this new craft brew collaboration from beginning to end, including the design of the label. Bassist Dave Foral, already known for his graphic designs and tattooing, created the imagery that’s featured on Dirty Heads Vacation Pineapple Session Ale cans and bottles. The bright, colorful label includes classic octopus art and palm trees to evoke the feeling of Summer.

Four Sons brewing is a family owned business from HB. They are great people that work hard and create amazing beer

“Four Sons brewing is a family owned business from HB. They are great people that work hard and create amazing beer,” Dirty Heads drummer Matt Ochoa explained. “I’ve been a fan of them for years now and to find out they were fans of us only made perfect sense to create something special together.”

When asked how the collaboration came about, Four Sons Director of Operations Deven Dufresne replied, “My brothers and I are big fans of the Dirty Heads and their music, so we are stoked to be working with them on this beer. They had some awesome input and were hands on the entire time, which resulted in a beer that we think not only their fans will love, but all craft beer enthusiasts out there.”

“We love nothing more than a nice crisp cool summer time beer,” says Dirty Heads percussionist Jon Olazabal. “No one does it better than 4 Sons. That is why we have teamed up with them to create this delicious Session Ale infused with the freshest pineapple we could find. Perfectly balanced and perfectly crushable, better grab 2 six packs because the first one will go quick.”

There is no limit on the amount of beer that can be ordered and shipping rates will vary by location for orders of 1-3 six-packs. Each order will include custom “Vacation” coasters featuring the octopus design that appears on the beer can. To order, Dirty Heads Vacation Pineapple Session Ale click here.

Also, Dirty Heads will be bringing some “Vacation” ale to cities across the country on their Fall tour and plan to host local tap takeovers and tastings with fans in select markets. For more information and the latest confirmed locations, please visit www.dirtyheads.com/tour.