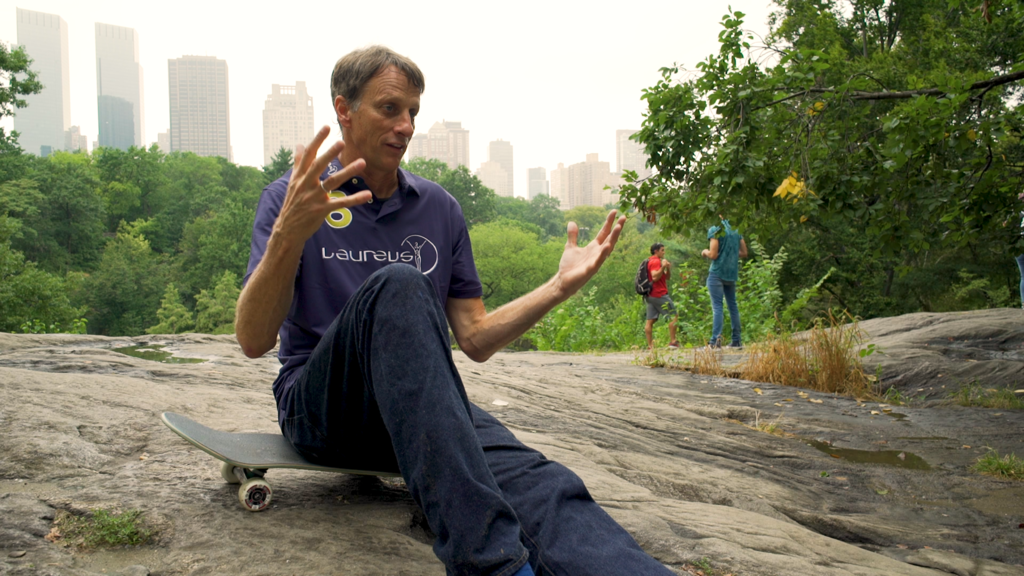 After a quick skate through Central Park in New York, skateboarding legend Tony Hawk participated in a wide-ranging interview with the homies at @LaureusSport for YEW!  Sharing his thoughts on everything from the evolution of skateboarding to Lizzie Armanto and the rise in female skating, Hawk’s interview can be read below.

Thanks for your time today, Tony. How does it feel being out skating around Central Park?

Tony: “It’s fun for me to skate anywhere and in New York it’s always vibrant and exciting and people are high fiving and getting selfies. I just love getting out to skate, it doesn’t matter where or when. I still love trying to create new tricks but it’s just that my motivation is more technical and less risky but it still feels the same to me as when I first started.”

You’re a Laureus Academy Member, what does your role mean to you?

Tony: “I’m hugely honoured to be part of the Laureus Academy and Laureus Sport for Good, who do so much good for so many kids around the world. I’m proud to take part.”

How has your sport changed since you first stepped on a board?

Tony: “I think skateboarding has greatly evolved since I first started. When I was first skating it was more considered a trend or a fad and something that you grew out of. Now it’s a legitimate career and there’s much more support for it. The perception now is that it’s a positive influence on kids.” What does skateboarding offer young people?

Tony: “Skateboarding teaches kids a lot about self-discipline and really can give them a sense of self-confidence that maybe they can’t find in team sports. That’s what it provided to me when I first started doing it and I feel like kids can find their voice and find a creative outlet. You know, it’s not just a sport, it’s very much an art form and a culture and a lifestyle and I think that it can influence kids positively.”

Lizzie Armanto recently completed ‘The Loop’ – can you tell us a little about her achievement?

Tony: “Lizzie, who is on our Birdhouse team, was the first woman to complete the full loop ramp. There are less than twenty people that have ever done that in the world, and she’s the first female. I’ve believed in her for a long time and I thought she could do it and the fact that she did it was amazing and it really resonated across the skate world and even across other sports worlds. She inspires my own daughter so I know how much effect she has.

“I think that there is more support for girls skating than ever. It used to be very much a boys club and it was kind of like you were either a novelty or you were pushed away. I think that now there is a whole contingent of women that are leading the charge and Lizzie’s one of them so I’m hugely proud of her.”

Skateboarding debuts at the Olympic Games in Tokyo in 2020, what are your thoughts on this?

Your series of video games is world famous, what are your thoughts on the growth of eSports?

Tony: “I think eSports definitely has a place in our society, I don’t know if that would necessarily be in the Olympics but I think that they have a huge following, huge competitions, they’re not lacking in any respect. They don’t need the validation of the legitimate sports world, they already have it on their own.”