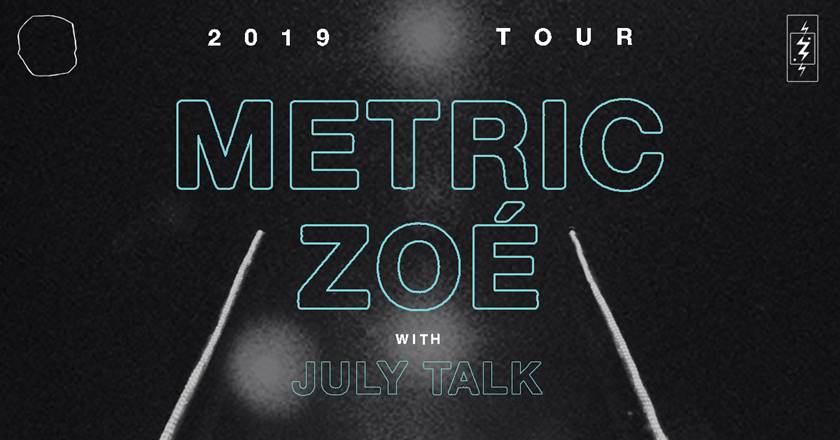 Today, multi-award winning rock bands Metric and Zoé announce they will embark on a co-headlining tour across the U.S. together in 2019. The two rock bands will be joined by special guest July Talk, supporting on all dates.

Toronto rockers Metric will be touring behind the release of their highly-anticipated new album, Art of Doubt, released this past Friday. Latin rock band Zoé were recently nominated for three Latin Grammys, including Best Alternative Music Album for Aztlán and Best Alternative Song for their single “Azul.” Fans can expect a night of incredible live music from both bands known for their cool, rhythmic sounds, amazing guitar melodies and persuasive vocals.

Produced by Live Nation, the 27-city tour will kick off February 11th in Cleveland, OH and will make stops in Brooklyn, Atlanta, Los Angeles, Chicago and March 5th at the Cal Coast Credit Union Open Air Theatre in San Diego, before wrapping March 25th in Detroit, MI. See full itinerary below. Tickets will go on sale to the general public beginning this Saturday, September 29th at 12pm local time at LiveNation.com. Artist presales for both bands will be held starting on Tuesday, September 25th 10am local time in each city for fans who signed up for their email list or fanclub, as applicable.

The tour has also partnered with PLUS1, with one dollar from every ticket going to support GRID Alternatives and their work in making renewable energy technology and job training accessible to underserved communities. For more information, go to www.gridalternatives.org and www.plus1.org.