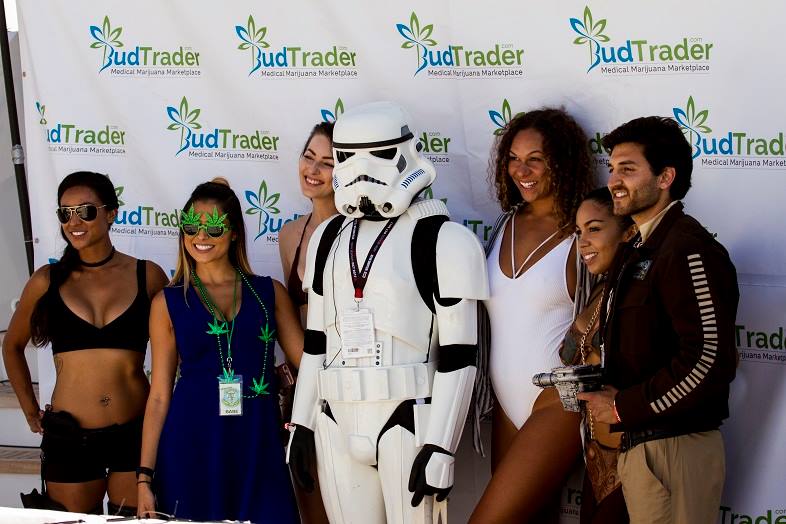 With all the off-site Comic-Con parties happening around San Diego, it was only a matter of time before cannabis companies starting producing their own, non-consumption events. After all, what goes best with video games and comic book culture? Yup, WEED.

The crew at BudTrader.com — a San Diego-based cannabis classified advertising platform / online marketplace — is returning to San Diego Comic-Con International with BudTrader Nerd Headquarters at Quad Ale House, 868 5th Ave in the Gaslamp. Open to the public, the free offsite experience will feature complimentary CBD water and CBD coffee for guests (while supplies last.) For the uninitiated, CBDs are the non-psychoactive part of marijuana. In other words, you won’t get stoned.

40 celebrities or there agents have reached out about coming by

YEW! caught up with BudTrader.com CEO Brad McLaughlin who said “since we announced that we’re coming back to Comic-Con, 40 celebrities or there agents have reached out about coming by.” In addition to celebrities, BudTrader Nerd Headquarters will host daily 4-hour shows (with contested games) and two nighttime events, a costume party, Friday July 20th, and a “White Out” party, Saturday July 21st. Not stopping there, McLaughlin, in an effort to throw the most hype party experience imaginable, is offering $10,000 to anyone who can get NBA superstar Lebron James to attend the party. In a statement, McLaughlin laid out very clear rules for his bounty on LeBron. “You can’t kidnap him,” stipulates McLaughlin. “No, I mean you literally can’t. He’s 6’8”, 300 lbs, has a 40 inch vertical and he’s the greatest athlete of our generation. So we’re going to have to appeal to Lebron in other ways besides brute force.”

Haha, good luck with that.