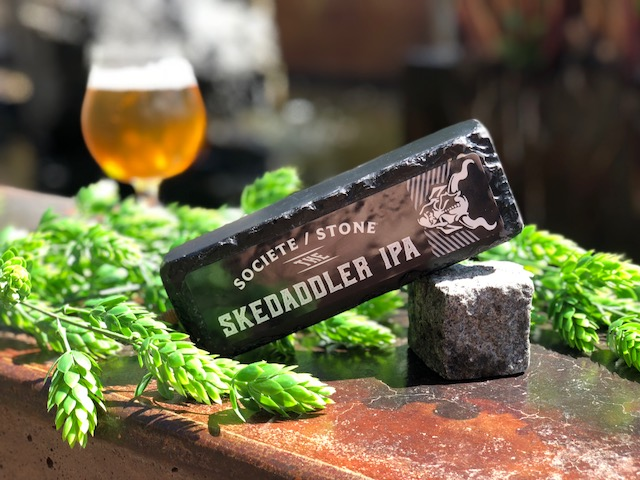 “We consider Stone trailblazers of the craft-beer revolution. Their vision was so in line with ours that, in the early days of Societe, we reached out to them and they were kind enough to provide some useful advice that helped shape our company,” says Societe co-founder Doug Constantiner. “It was such an honor for Stone to ask us to brew a collaboration beer with them.”

The belief of the team at Societe Brewing is that draft is the ultimate experience when it comes to hop-driven beers. So when Stone Senior Innovation Brewing Manager Jeremy Moynier contacted Constantiner and Societe co-founder Travis Smith to see what they’d think of brewing a collaboration beer that would be shipped across the country exclusively in kegs, the duo, touched by that level of respect and accommodation, happily jumped onboard. Stone and Societe started down the long, temperature-controlled road to what is Societe / Stone The Skedaddler IPA. Coming in at 7% alcohol-by-volume and boasting an eclectic hop bill built with American, Australian, German and New Zealand hops, it is full-bodied yet dry on the finish, with vibrant citrus, stone fruit and tropical flavors on the palate; just what a craft-beer fan would expect from two companies renowned for their IPA prowess.

“Independence is always in our battle cry, each year we release a draft-only beer in the summer months that reinforces our steadfast commitment,” said Stone CEO Dominic Engels. “Societe is the perfect partner for this occasion. The team maintains incredible allegiance to its fans and its dedication to delivering only the freshest beers. Like us, they’ll never sacrifice quality. Independence is our mutual guarantee to fans that these moral beliefs will never be compromised.”

“The fact that Stone would go so far to help us share our ideals and our beer with craft-beer lovers across the US means so much to us,” says Constantiner. “We only distribute in San Diego County, so for many this will be their first taste of anything having to do with our brewery. Knowing how much Stone cares about that is a big deal. They say it can be dangerous to meet your heroes, but this beer and the process that birthed it proves it can also be awesome.”

Societe / Stone The Skedaddler IPA will be available draft-only nationwide beginning this week.

Appearance: Golden and clear with a thin white head.

Taste: A massive amount of fruit that goes into a lot of dankness! A nice blend of fruit, fresh hop-resin and dank backbone. A taste of old school and new school. This truly tastes like a Stone/Societe beer!

Palate: Sweet fruit and a smooth middle that leads to a dry, bitter finish.