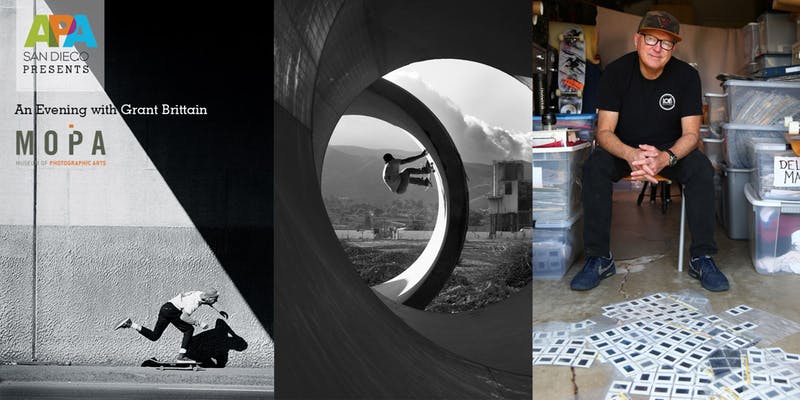 Join the YEW Crew for a special one-night event with APA photographer J. Grant Brittain including a photographic talk and slide presentation at the Museum of Photographic Arts on Thursday, June 14th, 2018.

Grant is a San Diego based photographer who has been shooting for nearly 40 years capturing some of skateboarding’s finest athletes since 1979. He began his career while working at the Del Mar Skate Ranch where he decided to pick up a friend’s camera, start shooting and the rest is history.

In 1983, Brittain helped found Transworld Skateboarding Magazine where he worked as the Photo Editor for many years. In 2004, he left TWS and helped form The Skateboard Mag, which he helped run for over 10 years.

Today Grant, a recent guest on the Cantore+YEW! podcast,  is still shooting daily and enjoying living life in Encinitas where he’s been a long time resident with his family, a Labrador retriever named Stella and a cat named Rosie.

Aside from his infamous skateboarding photography and personal book project, he’s focusing on commercial and personal work as well as speaking at photo events all around the globe.

To check out Grant’s work, go to jgrantbrittainphotos.com