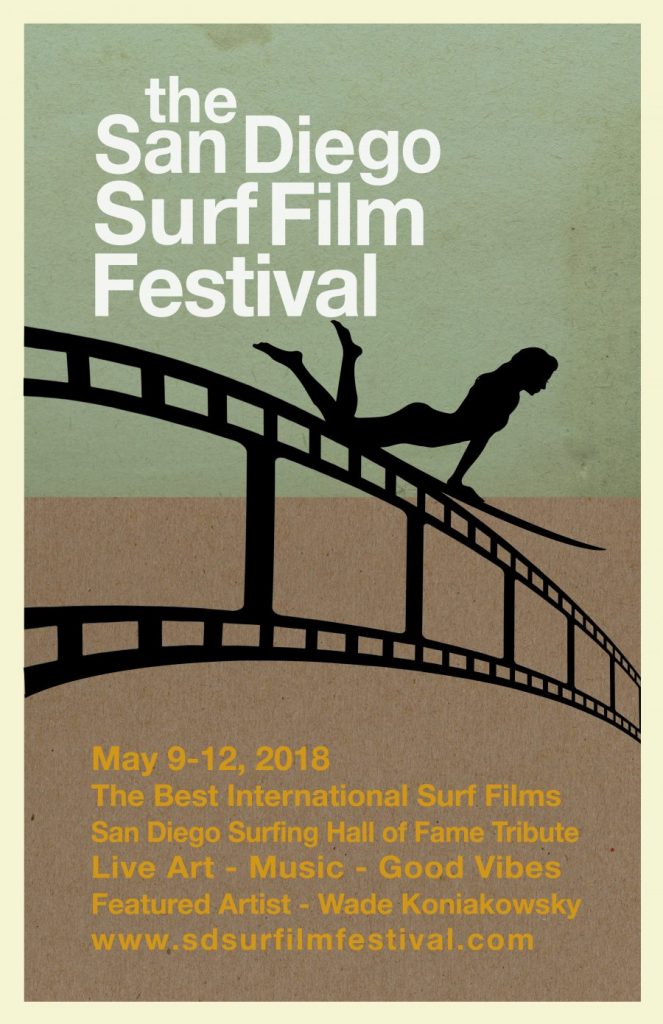 The hometown San Diego Surf Film Festival returns for its seventh year this week, May 9-12th,  bringing together some of the biggest names in surf filmmaking at over a dozen locations around San Diego. With it’s hub being the Misfit Gallery in La Jolla on Pearl Street, 15 of the best international surf films are presented over the 4 day festival with highlights including Nathan Oldfield’s “The Church of the Open Sky“, Taylor Steele’s “Proximity” and Nathan Curren and Pierre Denoyel’s “Biarritz Surf Gang” among many others.
“Simple, bring them all together at once,” offers San Diego Surf Film Festival founder Pierce Kavanagh with a smile. “Last year we presented Skip Frye with the Spirit of the SDSFF Lifetime Tribute Award which had a ripple effect far greater than originally imagined. It was such an incredible and heartfelt evening that we knew we had to continue. We recruited Skip and a select panel to compile a list of the 100 Most Influential Surfers to call San Diego home. For 2018, with the guidance and approval of the legends we are excited to announce we are turning that list into the San Diego Surfing Hall of Fame.”
The SDSFF 2018 kicks off Wednesday, May 9th, 6pm at featured artist Wade Koniakowsky’s Art Gallery in Solana Beach in what has been described as having a Live Art Beach Party vibe with some of California’s foremost surf artists.
Thursday, May 10th is the highly-anticipated San Diego Surfing Hall of Fame Induction Ballot Dinner Ceremony emceed by Hank Warner at the La Jolla Community Center. Over a dozen local eateries have come together to create a special tasting menu to be paired with Ballast Point beer, ZioBaffa wine and Babe Kombucha in what looks to be an incredibly memorable evening amongst the legends of San Diego surfing.
Friday and Saturday, May 11th and 12th include the majority of the San Diego Surf Film Festival Films with Special Events running throughout the day and evenings.
For more information, including a complete schedule of events and tickets, visit: www.sdsurffilmfestival.com
YEW!