All Things Must Pass. Even Russ Solomon. 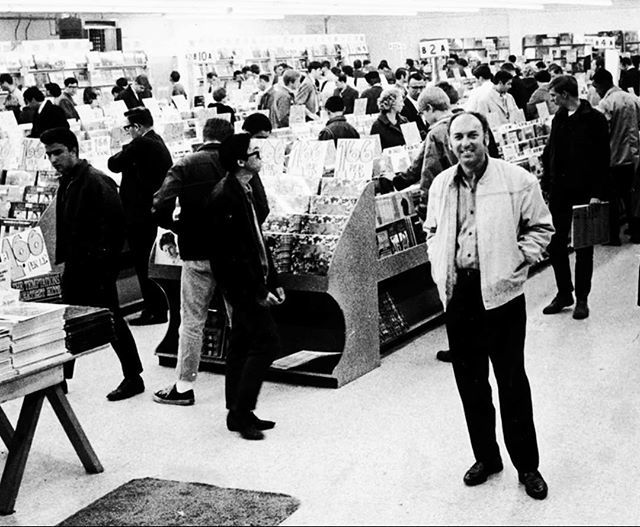 As reported by the Sacramento Bee, Russ Solomon, 92, the rebellious entrepreneur who built Tower Records into a global empire (and cultural movement) passed away Sunday night while watching the Academy Awards — and, drinking whiskey.

Punk rock to the day he died, the subject of the 2015 documentary, All Things Must Pass: The Rise and Fall of Tower Records, started selling records out of his father’s pharmacy in the 1950s, and in the late 60s, launched Tower Records.  By the nineties (during the CD boom,) Tower had over 200 brick-and-mortar stores worldwide including three in San Diego — Sports Arena (1972) / S.D.S.U. College Area / La Jolla.

Because of its proximity to the Sports Arena (and being the first San Diego location,) the Sports Arena Tower was arguably the best of the three, but, the El Cajon Blvd. store forever holds a special place in my heart.

In addition to being a place of employment (stocking shelves after-hours,) it was also the site of countless concert ticket on-sales, as well as midnight album sales — remember Guns N Roses Use Your Illusion 1 & 2?

More importantly, it was a place where you never felt alone as you wandered up and down aisles of genre-spanning music, magazines, and emerging technology.  And, if you were lucky, maybe you’d catch a free performance in the parking lot by one of your favorite bands.

After peaking in 1999 with $1 billion in annual sales, five years later, Tower Records would succumb to dramatic changes in the music industry. As music sharing sites and MP3s exploded, Tower declared bankruptcy in 2004, and eventually closed in 2006 — but, memories from your formative years can’t be liquidated.

In regards to Solomon’s passing, Monday night Colin Hanks, director of , All Things Must Pass tweeted it best: “The world lost an absolute legend last night. Russ Solomon changed my life; he changed the way I look at the world and how to navigate it. His wit and curiosity was unparalleled. He was, quite simply, one of coolest people I’ve ever met.”

The world lost an absolute legend last night. Russ Solomon changed my life; he changed the way I look at the world and how to navigate it. His wit and curiosity was unparalleled. He was, quite simply, one of coolest people I’ve ever met. It was an honor … https://t.co/LwLJ2qdzan pic.twitter.com/1cZwDiR36d