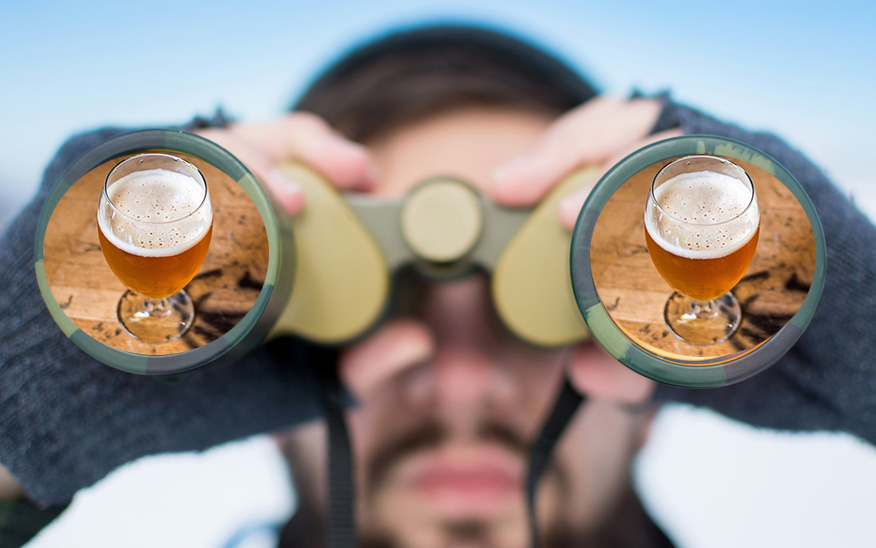 The anticipation is high, locations have been scouted, lustful cravings are almost palpable and whispers of codewords fill the air. Sorry Hallmark, we aren’t talking Valentine’s Day though, for craft beer fans, this time of year is particularly close to the heart. Why? It’s almost PtY time. That’s right, the legendarily elusive Pliny the Younger, Russian River Brewing Co.’s super-hoppy triple IPA that each year sets beer lovers off on a hunt in hopes of ending in bitter, beautiful, hoppy bliss. PtY is set to hit San Diego tantalizingly soon (rumors say this week) and Yew’s got you covered with everything you need to know to get hands on. Stay frosty, San Diego.

If you’re even remotely a beer fan, you’ve heard of PtY and the scavenger hunt that ends in bitter bliss. Pliny The Younger is arguably one of the best IPAs on the market, and as such has quite the cult following. People have been known to drive thousands of miles and wait in line for hours in hopes of getting their hands on this legend. This year marks the 14th year of PtY, a draft-only offering that will include Simcoe, Warrior, Chinook, Centennial, Amarillo, Azacca, Idaho 7, Crystal and Tomahawk hops. Yeah, that’s a hell of a lot of hoppy goodness and according to Russian River Brewing Co, all that wonder is simply too labor intensive and demanding of incredibly expensive raw materials (think hops and malt) to brew more than once a year. The result? A cultural event that draws beer fans from across the globe in hopes of getting a mouthful. Stakes are high after all,  bars don’t even know when or if they’ll receive this historically elusive brew. PtY has been enticing and eluding fans since its release in 2005 as the first of its kind –  a true triple IPA, meaning that it is incredibly hoppy and contains a good (read: kick in the pants) amount of alcohol (10.25% ABV, to be exact). Its recipe foundation is a rendition of year-round available Pliny the Elder: think of PtY as a hoppier, maltier, version with a hell of a lot more alcohol. A fiery orange liquid with thin snow white foam that first hits your nostrils with notes of citrus and pineapple, the aroma alone will have you anxious for more before your lips even get wet.

Do you know how to find this elusive brew? We’ve got the secret decoder ring for how some San Diego bars are letting their fans know when and where to get PtY. If you aren’t already following your favorite beer bars, start. Turn on notifications for the next week or so. Look out for mentions of the following terms: PtY, Please and Thank You, P.T.Y, and rarely Uncle Vinny, or just Vinny. If you see these code words pay attention, it’s possible someone is getting ready to tap a keg. Also, start becoming a Reddit stalker, you can follow that thread to find out if someone is tapping a keg near you. We also uncovered this awesome tool (we want to be friends with the developer) that scrapes social posts for PtY.  Finding the mythical PtY is part of the fun and with these tips, we’re sure you will be one of the lucky seekers this Pliny season.

Take some comfort in that we will update you guys as often as we can in hopes that we can all share a pint of Pty together! At this time, we believe we can say Pty doesn’t ship out to San Diego until the week of the 19th. We are working to confirm delivery dates and as always, will keep you guys posted! Be sure to give our Social a follow to stay totally clued in on PtY’s whereabouts and check out our list below!

We’ve got a list of locations that have received PtY in the past, a good indicator – but not a definite – that they’ll receive this hoppy masterpiece again as well as a few confirmed tapping’s listed below. Let’s start with confirmed.

The annual Heavyweight South Park Showdown featuring 15 incredible Triple IPA contenders taking on the MIGHTY Pliny the Younger! Join Hamilton’s in a 100% blind taste test as a judge to help determine the 2018 Champ! Each ticket grants you a seat of the judging table, plus VIP skip-the-line access to Hamilton’s official PtY tapping at 1pm, Sunday February 25th!

O’Brien’s will be doing their Charity Keg on Wednesday, February 21st at O’Brien’s Pub – tickets will be on sale this week! If you aren’t part of their email newsletter, be sure to sign up for all PtY updates!

Keep an eye out for tickets to their Charity tapping of Younger as they go on sale later this week!

Churchill’s will have a PtY keg at their annual Renaissance Festival on March 3rd starting at 11 am! As always, an amazing tap list to rival the ages.

Yew! Tip: At this time most of the diehard PTY fans will have gotten their hands on the beer, which means it’s easier to get your hands on a pint at this event. You should still arrive early, but you shouldn’t have to wait for hours to get in.