Thicker Than Thieves Are On Fire 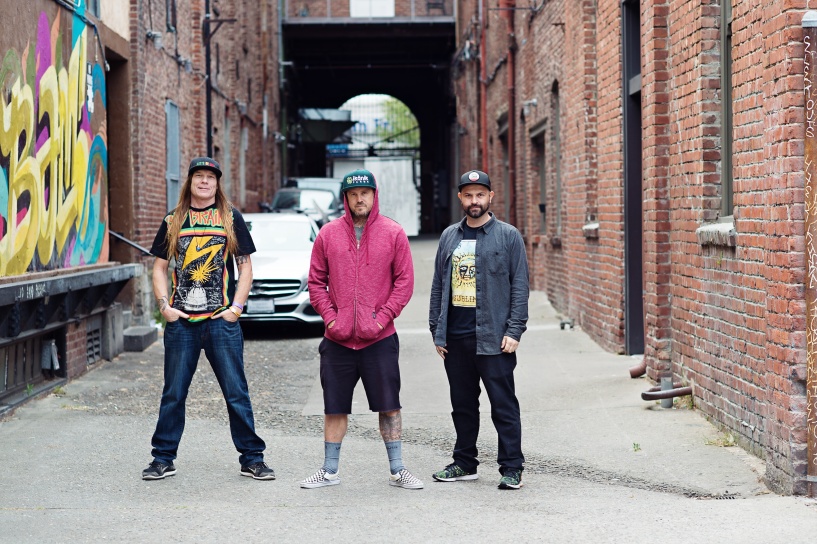 As you know by now, here at YEW! we are all about the Southern California way of life. It’s kind of our thing. So I’ll be reaching out to bands that pass the YEW! test. Thicker Than Thieves fully embodies our sun-soaked, 420-friendly, heady, laid back lifestyle of surf, music, cannabis, and beer. Just the other day, I had a dope conversation with Jamin, Brian, and Mora, as they were headed up the 5 on their way to perform at the sold out One Love Cali Reggae Festival in Long Beach. These guys walk the talk, and though the band consists of members from across the globe, they, as a band, are the very essence of SoCal culture. I couldn’t think of a more appropriate place to share our convo, so here YEW go…

YEW!: Let’s talk about your new single, ‘Fire Is Hot’. It hits all the right notes, both musically and lyrically. What was the inspiration for the song? You wrote it pretty quickly, didn’t you?

Jamin: Yeah, it actually originally just had an intro part that we had written. We were playing shows with Long Beach Dub Allstars, and we happened to get an encore at the last show, and decided to jam the song live, and just kind of made it on the spot. It was one of those moments where it all came cohesively together during a live performance. Of course, there’s different mechanics to the song that have happened since, but that’s pretty much where the musical inspiration came from. I think that lyrically, you know, it all comes down to the girl!

YEW!: Speaking of performing live, what’s it like to get up on stage and play for your fans and friends?

Mora: That connection is definitely the inspiration, motivation, the gasoline, everything to keep us doing what we do. It’s all about the fans. We just want to share the music, the lyrics, the whole feeling. That’s what keeps us going and working hard, and we’re definitely looking forward to all of the festivals and shows we’re going to be playing. I’m from Costa Rica, so it has been a great experience for someone from Central America to be part of this movement here in California, so that adds a lot more to it as well. YEW!: Does being from Costa Rica add a special flavor to Thicker Than Thieves?

Mora: Yes, completely. I take this as a huge responsibility because I know I’ve got a lot of people supporting me and looking at what I am doing, because it’s not easy for any musician, but especially from Central America, to be doing a lot of what we’re doing. I’m kind of representing my country in a way, and that makes me so happy.

Jamin: To add to that, I think also when it comes to how we write our songs, having band members from different parts of the world really adds to the flavor, especially in the new songs and the direction that we’re going currently. I mean, we have a lot of moving parts that allow us to really add different types of flavor to the music. For some of us in the band that are older than others, being able to bring in the different age brackets, and also the different ways each of us listen to music on our own, it also helps us to be able to stay competitive in the music market and being able to produce songs like ‘Fire Is Hot’. Of course, having a little bit of that Latin flavor, a little bit of that California flavor, and that island vibe, that is what really gives us a uniqueness that sets us apart from a lot of bands that are out right now. YEW!: Would you say that you fit into a specific genre? Obviously, you are largely reggae, but there is definitely that rock influence in there, and your lyricism is very dominant.

Jamin: Yeah, we consider ourselves a crossover band. I think a lot of our heart started in the whole punk rock genre, and of course reggae touches everybody in a special way, so being able to mix those genres together…again it all comes down to the way we actually write the songs. Even a lot of our older stuff, how we play those songs live, it makes a big difference.

YEW!: Your vibe as a band seems to be just as important as your sound- it helps the audience connect because they can relate to your lifestyle, or for those who don’t live in coastal or island regions, they kind of live vicariously through your music. Is that a correct assumption?

Jamin: The music is what it is, but the lifestyle is also a big part of what we do as a band, and all of us individually. You’ve got Brian Sykes coming from a weed growing area of the world, you’ve got Mora from Costa Rica, myself from California. Lifestyle really plays a big part in everything that we do. I think that’s really where the reach is, because being able to combine our influences as well as the places we all come from, that’s what creates the lifestyle. YEW!: Who are your inspirations?

Mora: For me, it was initially a lot of the 90s grunge, that was my first real magical connection. Then I had a really good connection with Steel Pulse. Besides Bob Marley, Steel Pulse brought a really interesting blend. I would say that those two were key for what I do.

Jamin: For me, as a kid going to punk rock shows and watching them bring in a lot of reggae bands from places like Jamaica, because they really didn’t know where to put a lot of those bands at certain times of the growth of this movement. That was really the inspiration for me. The music that we play now is because I was able to experience all of those vibes in one concert. For us to be able to include those different feelings all in a song, that’s really what sets apart our sound compared to any one specific type of music.

YEW!: Tell us about your upcoming shows and tour dates.

Jamin: We just got added to the Illuminate Tour with Tomorrows Bad Seeds that starts on May 15th for us. We’ll be starting in Pennsylvania and working our way back to California. We just picked up a new booking agent, The Empire Agency. We’ve got a lot of stuff on our plate right now. We just got an offer today to open for Fishbone. So we’re working and excited for all of our upcoming dates and tours. There is definitely a lot to be announced still. We’re going to be announcing our spring and summer calendar within the next week or two.

YEW!: Anything else you’d like to promote? I know you have a ton going on.

Jamin: We’re collaborating right now with a vape company called True North Vapes. They’re out of San Diego. We have our own box set- a Blue Dream THC cartridge, as well as a Fire OG that’s promoting the ‘Fire Is Hot’ single. All of this can be found in dispensaries here in California. There’s a QR code that allows you to listen to the song through Spotify. That’s the newest addition to our line of merchandise. Of course, we’re always working on things to keep it fresh and exciting for the fans.

YEW!: Jamin, you personally are all over the place- Hawaii, Costa Rica, here in SoCal, and that doesn’t even include touring. What is it that keeps you going through all of the travel and the chaos of living such a nomadic lifestyle?

Jamin: You know, I get goose bumps thinking about it. That’s a really interesting question, to be honest. I think it’s just the love of doing what I do. I love what I do. The inspiration comes from keeping people happy. We were talking about it earlier, I have a hard time saying no, but at the same time, saying yes feels so good. That’s really what keeps me going, and keeps me happy.

YEW!: Thanks so much for talking to us, that wraps it up for today. We’ll see you guys tomorrow at the beach!

Jamin: That sounds awesome, looking forward to it. Thank you so much, Pamela!