Namastay for Another Round 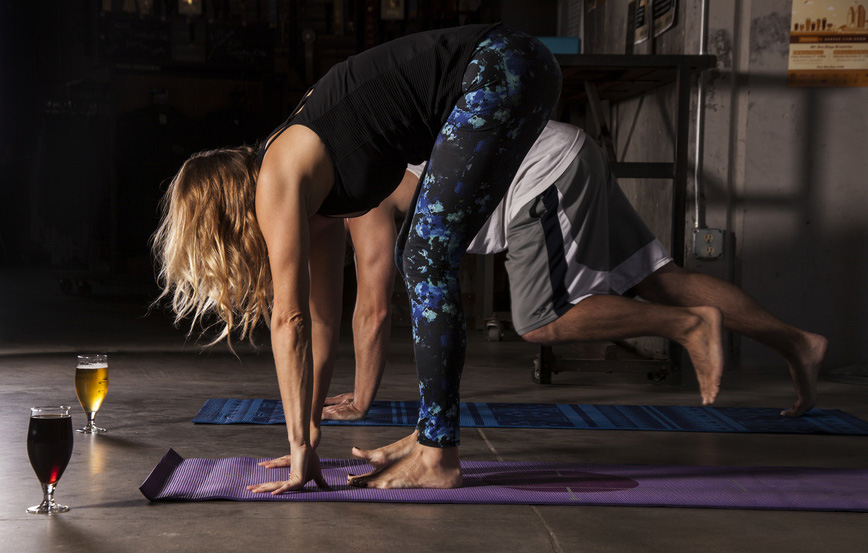 San Diego is a meditative masterpiece within itself: home to some of the most serene beaches, soothing sunshine and trademark good vibes. For those looking to experience an even greater level of San Diego serenity look no further than Culture Brewing Company‘s weekly sessions of Beer and Yoga. Yeah, you read that right. It’s a thing. A beautifully hoppy, sun-salutation and sipping filled hour that showcases the marriage of two centuries-old traditions designed to delight the senses, relax the body and center the mind (or in the very least, be a total blast). Move over green juice, it turns out beer and yoga are a match made in heaven.

Culture Brewing Company has been a community favorite since the first location opened in Solana Beach, a little over five years ago. It was no surprise that San Diego welcomed this craft brewery with open arms, and with three locations under their belt, Culture continues to brew some seriously great beer. Even more impressive is Culture’s continued commitment to their community: each location is hyper-local, focusing on bringing light to local artists and businesses with monthly pop up shops, fundraisers, and events. When Culture Brewing Company expanded to Encinitas, they opened up shop amongst some of North County’s go to stops for dining, drinks, shopping and even yoga. Enter Evolve, an alternative Yoga studio a stone throw’s distance away, and just like that…Beer and Yoga was born.

By the time we’d secured a parking space along the ever-bustling Highway 101, a line of 10 or so self-proclaimed Yogi’s had formed outside Culture Brewing’s rustic, concrete Encinitas location. I couldn’t help but register butterflies in my belly – ever the perfectionist, I wasn’t too stoked on the idea of flailing around on a rubber mat in front of people I didn’t know. Clearly, my yoga experience is limited, but not for lack of other people telling me it’s the secret ingredient to living a more clear-headed, focused, balanced life. I’ve had everyone from chiropractors to friends, family to well-meaning acquaintances swear up and down that if I would just carve out a few hours a week to devote to this time-honored tradition I’d be a whole new woman. Sure, sure, sure. Pass. Then, Boga (Beer plus Yoga) was suggested and I knew this was my shot to get back on that mat, butterflies be damned. I could flail and flop all over the place if everyone else was happily drinking! With a $20 dollar cost and only an hour time commitment, I soon found myself amongst my fellow weekend athletes (Look Ma, I made it!) on Saturday morning. At first glance, we’re a group of happy, mat-totting San Diegans chatting about surf checks and Superbowl plans, waiting for your typical studio to open. Sure, there’s an impressive mix of both men and women and maybe a Culture Brewing Co branded T but still, nothing too out of the ordinary for a San Diego Saturday. It’s easy to forget that we aren’t shuffling on this sunny sidewalk waiting to unfurl our mats in just any studio, and as a smiling Evolve instructor comes to unlock the door and usher us inside, the sweet, almost fruity aroma of Culture’s fresh hops reminds us of that. This is Beer and Yoga: a 60-minute class designed for Yogi’s of all levels to unwind, stretch and sip on a pint of their choosing either during or after the class. While I negotiated my mat onto the perfect slice of sunshine seeping in, a few of my fellow classmates expertly marched right up to the tap list: ordering with the quiet confidence one must have to sip a beer while contorting their bodies in a room full of people. As a Yoga novice, I opted to hold out on enjoying my Tart Cherry Wit post poses but was particularly impressed by the handful of people who managed to do both simultaneously, including the Culture bartender!

The class itself was led by a uniquely soothing voiced Evolve instructor who guided us through a solid hour of sequences with an cool twist – encouraging us to turn our focus to our breath and movement, understanding that some poses simply call for a sip or two (or four, hey, there’s no judgement in this space). She reminded us to listen to our bodies and adjust our stances and pace accordingly. A few minutes in I honestly completely stopped taking notice of the brewery around me. My shoulders – usually tight enough to be considered earrings – dropped, my breathing evened out, my ever-present to-do list seemed to melt away with the passing moments. It was clear there were no expectations in this room and the vibe was playful, peaceful and quintessential San Diego. I loved that some class goers were well versed in the study of yoga, others perhaps more so in the art of beer drinking but together, we had a uniquely awesome Saturday morning practice that finished with a toast to cold, well-deserved pints. Post class, Culture Brewing opened to the public and my fellow Yogi’s seemed all too happy to stay, socialize, and sip on some more awesome craft beer. As I polished off my pint, I found myself totally and completely at peace – maybe it was the 60-minute soothing sweat session, or maybe it was the ABV percentage in my Tart Cherry Wit. Either way, as I left Boga I found myself moving my mental calendar around to make it back next Saturday. Cheers!

Have you guys ever tried a Boga class? Did you love it? Hate it? I’d love to hear from you in the comments below. Does a favorite brewery of yours do something similar? Let us know, we’d love to get your stretch and sip on near you!