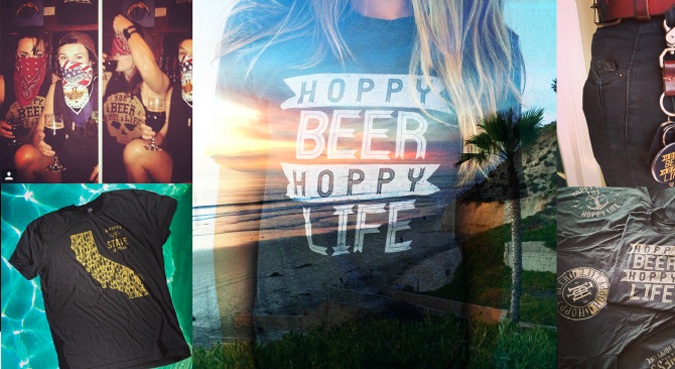 Summer’s here, and if you’re looking to add some new beer-focused attire to your warm weather wardrobe, Yew! Beer Correspondent Kelly Cashman has a few suggestions for you. A San Diego based company run by all around bad ass Rudy Pollorena Jr. You can usually spot Rudy at various craft beer festivals and events with his gorgeous wife Amy Ledesma selling merch to beer-drinking patrons. Craft Beerd recently hit their 4 year anniversary and is still going strong! Personally, as a California native and craft beer drinker, I find the “Beerifornia” line of clothing to be my favorite. It is no secret that Californians find it vastly important that everyone else knows they are from California, and this transfers to individuals who drink craft beer. There are a few companies that mix a passion for craft beer with fashion, and the Women’s Craft Beer Collective is one that rises above the rest. For starters, owner Kristine Baker knows her clientele, and by recognizing a lack of comfortable/fashionable beer shirts for women she came up with the tank dawning logo “Free to Choose the Beer I’ll Drink” . As a beer-drinking lady myself, I know that tight fitting tanks aren’t always the most flattering of options, especially after pounding a couple IPAs. This is Baker’s only apparel item so far, but she also sells trendy faux suede chokers featuring the SRM (standard reference method) for trendy beer nerds, as well as tote bags, bar towels and more. Artist Chris Jacobs started Beer Zombies a little over 3 years ago, and what started as a site reviewing craft beer and covering events transformed into an epic merchandise venture complete with beer zombie glassware, bottle openers, t-shirts donning a hoppy bearded zombie, and even beard oil! Promoting the craft beer culture through quality merch is what BrewHeads is all about, providing hilarious shirts like the “BEER” shirt with an agro bear rocking antlers, or “Hop Slayer” featuring Jason Voorhees carrying a six pack. This crafty company also sells leggings littered with hops so you can show off your butt walking to and from the bar. Among the coolest products coming from this company are their wooden bottle openers, helped by their friends at Wood and the Hood who take discarded trees from Minnesota and give them a new purpose.